Thie Is Guaranteed To Put A Smile On Your Face 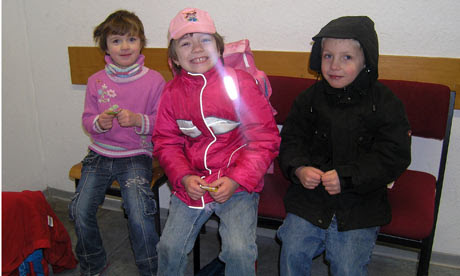 It is a dream that has been shared by lovers across the centuries – the chance to elope to exotic lands. But few would have been as bold and spontaneous as six-year-old Mika and his five-year-old sweetheart Anna-Bell who, after mulling over their options in secret, packed their suitcases on New Year's Eve and set off from the German city of Hanover to tie the knot under the heat of the African sun.

The children left their homes at dawn while their unwitting parents were apparently sleeping, and took along Mika's seven-year-old sister, Anna-Lena, as a witness to the wedding.

Donning sunglasses, swimming armbands and dragging a pink blow-up lilo and suitcases on wheels packed with summer clothes, cuddly toys and a few provisions, they walked a kilometre up the road, boarded a tram to Hanover train station and got as far as the express train that would take them to the airport before a suspicious station guard alerted police.

"What struck us was that the little ones were completely on their own and that they had lots of swimming gear with them," said Holger Jureczko, a police spokesman. He described Mika and Anna-Bell as "sweethearts" who had "decided to get married in Africa where it is warm, taking with them as a witness Mika's sister".

Anna-Bell told the German television station RTL: "We wanted to get married and so we just thought: 'Let's go there.' "

Mika and Anna-Lena's mother, who was not identified, said she had known nothing of her children's plan. "I'm still in a state of shock. I thought 'I'm playing a part in a bad movie.' When we realised the kids were missing we went looking for them." But only when the police called did they realise what had happened.

Asked why they failed to let their parents know, the children said they thought they would not be gone for long.

Mika told police he instigated the plan having been inspired by a winter holiday with his family in Italy. "Based on this the children began to make plans for the future," Jureczko said.

To allay their disappointment at being caught, Hanover police gave them a tour of the police headquarters. Jureczko said: "They'll have the chance to put their plan into action at a later date".
Posted by Arlene Jones at 2:29 AM