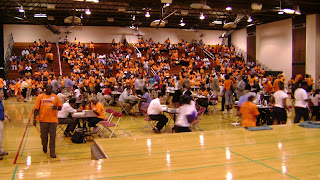 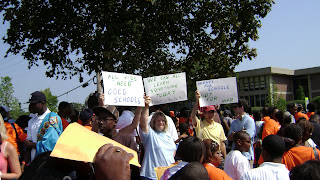 I attended the recent Save Our Schools rally. I had previously written that what state Senator Rev. James T. Meeks was doing in implementing the Chicago Public Schools boycott/protest on the first day of school was a stunt. I wanted to get a firsthand look at the actual event. So I joined the folks who left from Heritage International Christian Church on Tuesday on one of the three buses that departed from that location.

I would estimate 150 people went to the rally from that location. The majority were children, but a significant number of adults served as bus captains, educators, food service or parent chaperones. Prior to departure, I had a chance to speak with several of the ministers who were co-organizers of the rally. The crux of the conversation boiled down to a frustration over what is not happening at CPS. The same message could be heard from other adults who attended the rally. Something needs to be done and at this point in the process, the feeling was "by any means necessary."

We arrived at the Northfield campus for New Trier and as soon as we departed the bus, we were greeted by a man who shook our hands and identified himself as a proud New Trier graduate. He welcomed us and as we walked toward the schools, we encountered several other residents who were holding signs of welcome. There were also a number of small tables set up with cold water and paper cups.

We entered the gym where a number of tables were set up for people to pre-register their children. The New Trier campus complex in Northfield was built in 1965. As the school enrollment for that campus increased, the school was used as a four-year high school. When enrollment declined, that campus was closed and turned into a community center/senior center/public swimming pool. With enrollment back up, the campus now currently hosts just the freshman class. New Trier serves as the only public high school for the suburbs of Wilmette, Glencoe, Winnetka, Kenilworth and most of Northfield, as well as parts of Glenview, Northbrook and Evanston.

I happened to be in the gym when Rev. Sen. Meeks arrived. As he spoke to the officials from New Trier, he told them the protest was only for one day and apologized for putting them in the middle of the fracas. His actions, he said, were based on wanting to bring attention to the issue. We spent over two hours at New Trier for the "registration" process and then boarded the buses to go to the forest preserves for lunch, a short presentation of speakers, including the only other elected official, state Rep. Mary Flowers, and the ride back home.

My opinion after the rally didn't change. Although the organization was extremely impressive, I wondered why the same emphasis hasn't been placed on each church adopting a local school to mentor for the entire school year with an emphasis on the three Rs? And though Rep. Flowers stood on the podium and advocated for the boycott, several news reports mentioned that her own child went to school that day!

It is my understanding from a number of sources that the registration papers taken by New Trier can be used by them to claim those students as being in attendance at their school. Thus New Trier will benefit from state funding as a result of the protest rally. Lastly, a lot of the news shows had Mayor Daley criticizing the boycott and chastising the organizers for "using children to get political decisions made." Hmmm, isn't that the exact same thing he did in advocating for the building of a new Children's Museum in Grant Park?
Posted by Arlene Jones at 12:53 PM