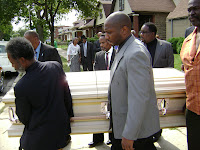 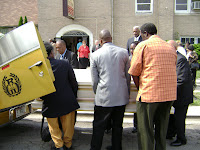 When we lose people in our lives, we always want to ask the question: "Why?" Why did they die so soon? What about them made God want them now and not later? Why does God take some and not others? I can't answer those questions but I can ponder the responses. I have concluded that when God called Delores McCain home, it was because he had a big story and only she could report on it. Lord knows she knew how to lift every stone to get to the answers.

She was everywhere and on top of everything. She was an opinionated voice who brought many ideas to the table. And she loved this newspaper and reporting for it. One of my earliest memories of the Austin Weekly News was seeing my neighbor's brother-in-law in the Streetbeat section. I felt like he was a star getting his picture and comments in a newspaper. Over the years, that part of the paper has always been my favorite. Delores handled that feature and I loved being able to see the average Austinite's opinion regarding current issues.

The first time I ever met Delores, I was sitting at home in front of my computer and the phone rang. It was Dee. I will always remember that call because since I don't have an office at the Weekly, I was honored that she took the time to reach out to me. I was a new person writing for the paper and she had read what I had written and wanted to get to know me. I remember we talked about a number of things, but mostly about the paper and my writings.

Over the years, I would run into Dee at different events. It was always a pleasure to see her. Why will I miss her? Because she was a source of information and would freely pass on her knowledge. If an important event happened where she got the "inside" photos, she passed it on. I still have a number of emails in my inbox where she sent me things that no one else did. Delores and I both shared a passion for how black people are portrayed in the media. We both have been advocates in making sure this neighborhood paper does its best to put out real news and information. Her shoes will be hard to fill, but anyone walking down the path she forged will have giant footsteps to follow.

When you saw Delores McCain, 99 percent of the time she had Frank Pinc by her side. He was her photographer and Frank's "other wife." They traveled together so often as a team that I couldn't imagine Delores doing anything without him. Even after Frank announced his "retirement," I still saw the two of them together doing Streetbeat. Life will go on after Delores' passing, but what she added while here is immeasurable.

She will be missed.
Posted by Arlene Jones at 8:26 AM