Pray for Obama T-Shirts - KNOW THE PRAYER AND THEN DON'T BUY! 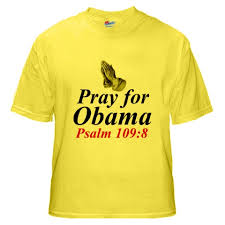 8 Let his years be few; let someone else take his position
9 May his children become fatherless, and his wife a widow
10 May his children wander as beggars and be driven from their ruined
homes.
11 May creditors seize his entire estate, and strangers take all he has
earned.
12 Let no one be kind to him; let no one pity his fatherless children.
13 May all his offspring die. May his family name be blotted out in a
single generation.

King James Version
8Let his days be few; and let another take his office.
9Let his children be fatherless, and his wife a widow.
10Let his children be continually vagabonds, and beg: let them seek
their bread also out of their desolate places.
11Let the extortioner catch all that he hath; and let the strangers
spoil his labour.
12Let there be none to extend mercy unto him: neither let there be any
to favour his fatherless children.
13Let his posterity be cut off; and in the generation following let
their name be blotted out.
Posted by Arlene Jones at 10:42 AM