Doed this Man Represent Being a Real American????? 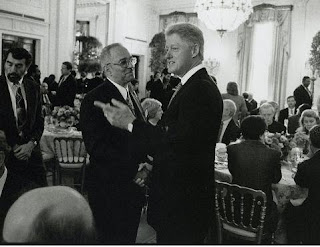 In 1961, a young African-American man, after hearing President John F. Kennedy's challenge to, "Ask not what your country can do for you, but what you can do for your country," gave up his student deferment, left college in Virginia and voluntarily joined the Marines.

In 1963, this man, having completed his two years of service in the Marines, volunteered again to become a Navy corpsman. (They provide medical assistance to the Marines as well as to Navy personnel.) The man did so well in corpsman school that he was the valedictorian and became a cardiopulmonary technician. Not surprisingly, he was assigned to the Navy's premier medical facility, Bethesda Naval Hospital, as a member of the commander in chief's medical team, and helped care for President Lyndon B. Johnson after his 1966 surgery.For his service on the team, which he left in 1967, the White House awarded him three letters of commendation.

What is even more remarkable is that this man entered the Marines and Navy not many years after the two branches began to become integrated.While this young man was serving six years on active duty, Vice President Dick Cheney, who was born the same year as the Marine/ sailor, received five deferments, four for being an undergraduate and graduate student and one for being a prospective father.Presidents Bill Clinton and George W. Bush, both five years younger than the African-American youth, used their student deferments to stay in college until 1968. Both then avoided going on active duty through family connections.

Who is the real patriot? The young man who interrupted his studies to serve his country for six years or our three political leaders who beat the system?

Are the patriots the people who actually sacrifice something or those who merely talk about their love of the country?

After leaving the service of his country, the young African-American finished his final year of college, entered the seminary, was ordained as a minister, and eventually became pastor of a large church in one of America's biggest cities.


This man is Rev. Jeremiah Wright, the retiring pastor of Trinity United Church of Christ.
Posted by Arlene Jones at 11:15 PM